Watching the decade come to an end is like driving in hazardous conditions. Distinct events are difficult to discern in the mayhem. Brexit, Trumpism and the break-up of Britain appear like different-coloured smears on the windscreen of a car careering out of control.

The year started with the inauguration of the new Brazilian president Jair Bolsonaro, a far-right, pro-gun, pro-torture populist elected in 2018, and ended with failure at the COP25 global climate meeting in Madrid. The two events are not unconnected. Less than a fortnight ago, Australia – which assisted Brazil in scuppering the UN meeting – registered its hottest ever day since records began.

Hundreds of violent bushfires raged across the country. Sydney choked on soot and smoke. As Charlotte Wood wrote from the city: “There’s nothing like going to sleep with the taste of ash in your throat to give you an actual, ­physiological understanding of real fear.”

As an example of deep denial, Australia may be leading the way, but we’re doing well too.

As the Scottish Government prevaricated endlessly about Exxon Mobile’s site at Mossmorran in Fife, this was the year global climate strikes came to Scotland and Extinction Rebellion exploded into the public consciousness.

After the school strikes, BBC Scotland’s flagship news programme The Nine breached its own guidelines on reporting climate change by inviting Andrew Montford, the deputy director of notorious climate science denial propaganda unit, the Global Warming Policy Foundation, to appear on the show.

Last year the BBC was forced to introduce new guidelines after repeated criticism over the past decade for enabling “false balance” on the topic of climate change, as well as for failing to fully implement the recommendations of the BBC Trust’s 2011 review into the “impartiality and accuracy of the BBC’s coverage of science”.

As a result of the invitation, all of the Scottish climate campaign groups withdrew from participation in the programme.

The public broadcaster isn’t alone in its failure to cover the climate crisis with any integrity. The problem is found across the media.

If the climate crisis was the ever-present story of the year, it was accompanied by the ­unfolding constitutional disaster of Brexit.

The break-up of Britain

The crisis seemed an interminable event, ­dragging itself across our lives and obliterating everything in its path.

I had almost forgotten that it lead to the resignation of Theresa May. May announced she would step down as Conservative Party leader on June 7. She broke down in tears as she said serving as Prime Minister was “the honour of my life”. She was replaced by the man whom Blair McDougall, the Better Together chief, once foretold would never become PM.

Democratic Unionist Party (DUP) leader Arlene Foster told us she hoped the next Conservative leader would have “an understanding of what makes the DUP tick”. She said May had discovered that “when you try to bounce the DUP it simply doesn’t work”. The DUP are now toast and Boris Johnson is PM.

As we teetered endlessly on the edge of a no-deal Brexit the October 31 deadline came and went.

The race to be Conservative leader wasn’t the only show in town.

The Liberal Democrats opened nominations for a new party leader after the incumbent, Sir Vince Cable, stepped down on July 23. He was to be replaced by Jo Swinson. She lasted less than five months before being ejected from her own seat after a disastrously incoherent ­General Election.

On July 23 Johnson was elected leader of the Conservatives. He won 92,153 votes against Jeremy Hunt’s 46,656 votes. After winning the election, Johnson made a short speech outlining his plan.

He said: “Like some slumbering giant, we are going to rise and ping off the guy ropes of self-doubt and negativity with better education, ­better infrastructure, more police and fantastic full-fibre broadband sprouting in every ­household. We are going to unite this amazing country and we are going to take it forward.”

What then followed was an extraordinary five months of chaos and illegality when he was ­defeated at every turn and managed to lose more votes in a few weeks than any leader had in decades. He prorogued Parliament, lied to the Queen and then was elected with a huge majority.

This was the year that absurdism met capitalist realism. Surfing a wave of nationalism, England swept Johnson to power on a promise to “Get Brexit done” and a series of “glittering generalities” that superseded the deluge of stories about his racism, serial lying and incompetence in office.

None of that seemed to matter.

It was a year when politics appeared to have become a mockumentary about itself with ­increasingly implausible plot lines.

As the leadership revolving doors continued to spin (Jeremy Corbyn will be next but showing his usual decisive leadership he’s decided to hang on for a few months) one leadership swap we can’t overlook is the Scottish Conservatives. At the end of August it was plain that Ruth ­Davidson couldn’t work with the newly elected Conservative leader and she resigned to a ­fanfare of media adulation. Jackson Carlaw, the party’s deputy leader, was asked to stand in and he’s been there ever since. Having overseen his party losing seven seats in a General Election it’s remarkable he’s still in post, but that’s the kind of year we’ve had.

This year marked the 30th anniversary of the ­Tiananmen Square massacre. The world watched as the year passed with increasing state violence against what had started as peaceful mass protests in Hong Kong defending civil liberties. It soon became clear that the tactics of police intimidation long practised on mainland China had been imported into Hong Kong and the “one country, two systems” era was over.

In Catalonia too state repression and police intimidation was heightened. One Monday morning in September nine pro-independence activists in Catalonia were arrested in a swoop by the Guardia Civil. They are charged with ­rebellion and sedition, the same offences that the 12 Catalan political prisoners had been ­accused of.

The operation was conducted under the instruction of the Audiencia Nacional, the Spanish central court that deals with “offences against the Crown” and terrorism.

The Guardia Civil have said openly that the arrests targeted local groups working under the name Committees for the Defence of the Republic. Those groups came directly from the non-violent grassroots community organisation that was established to organise the referendum on the October 1, 2017, and since then has focused its protests on the political prisoners.

The arrests allowed the Spanish state to heighten political tensions and to raise speculation around a threat of Catalan “terrorism”.

In September too the world stood aghast as the Brazilian rainforest burned.

It’s been a year of burning.

Raoni Metuktire, chief of the indigenous Brazilian Kayapo people, issued a statement saying: “Why do you do this? We can see that it is so that some of you can get a great deal of money. In the Kayapo language we call your money piu caprim, ‘sad leaves’, because it is a dead and useless thing, and it brings only harm and sadness. You have to change the way you live because you are lost, you have lost your way.

“Where you are going is only the way of destruction and of death. To live you must respect the world, the trees, the plants, the animals, the rivers and even the very earth itself. Because all of these things have spirits, all of these things are spirits, and without the spirits the Earth will die, the rain will stop and the food plants will wither and die too.

“We all breathe this one air, we all drink the same water. We live on this one planet. We need to protect the Earth. If we don’t, the big winds will come and destroy the forest. Then you will feel the fear that we feel.” 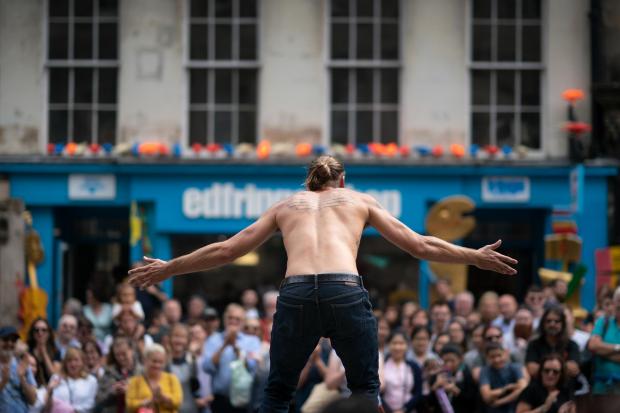 The film was both visceral and viral and seemed to reflect years of discontent from Edinburgh citizens for an event that has grown and morphed into something vast and corporate and increasingly culturally irrelevant. The film would be seen by more than 60,000 people and was the most discussed intervention of an increasingly vacuous event.

Just as the year seemed to be ending in a few more weeks of political torpor, the Duke of York attempted to shut down the ongoing speculation about his involvement with his late friend, the convicted pedophile and sex trafficker Jeffrey Epstein, by offering himself for interview to Newsnight’s Emily Maitlis.

It was, as the journalist Suzanne Moore called it, an exercise in “monstrous self-pity and ­frankly astonishing stupidity”.

Prince Andrew had been advised not to do the interview.

Jason Stein had been hired in September to attempt to “revive Andrew’s reputation”, and he quit after his advice was ignored. One palace source said the BBC interview would “go down as one of the single worst PR moves in recent history”.

Stupid, worthless and forgetful. This is what British meritocracy looks like.

So we end the year with the improbable prospect of Boris Johnson as Prime Minister, stubbornly rejecting the reality of a mandate for an independence referendum and the Union on life support – sustained by undemocracy, a voluntary Union in name only.

As the third and final instalment of the Star Wars trilogy is released, the Empire Strikes Back.