Lochgelly
Albert JFC is a Scottish Junior/non-league football club formed in 1926 as an
amateur club who represent the former mining town of Lochgelly in Fife playing
their games at Gardiners Park. 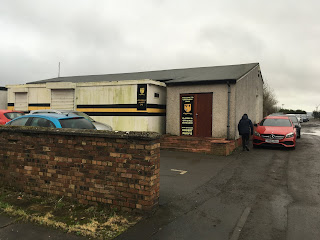 It is
thought that the name ‘Albert’ may have been adopted as it is the name of a
French town near the 1916 Somme battlefields, where a few young men from
Lochgelly perished during the battle.

Albert offered
a replacement for Scottish League side Lochgelly United who disbanded during
the War years before finally folding for good in 1928 having been league
members between 1915 and 1926 from their Recreation Park home. 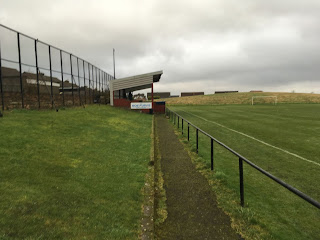 Lochgelly
played their first match in the Junior ranks in July 1933 away to Kirkford
Juniors; with success soon following, as Albert became Fife Junior League
champions in 1937-38. By then another club, Lochgelly Violet had joined the
Junior set up in 1935.

The first
derby between the clubs attracted a crowd of 2,000 to Gardiners Park. Violet
had a youngster in their ranks called Billy Liddell, who would move onto Liverpool
to become one of their greatest ever players. 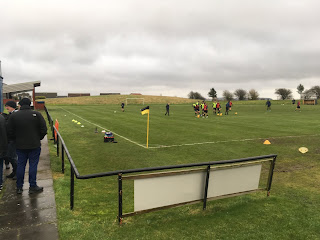 A second
Fife League title followed in 1946-47 before a record Gardiners Park crowd of 11,
645 attended the Scottish Junior Cup sixth round clash against Bo’ness United. The
Fife League championship flag was regained in 1948-49.

Further league
titles were achieved in 1954-55 and then 1973-74. Albert remained in the Fife
Junior League until all clubs from the area joined the East Region of the
Junior set up for the 2002-03 campaign. 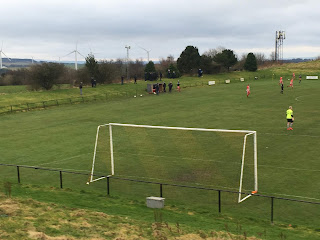 Restructuring
of the leagues followed in 2006-07, with Albert being placed in the East Region
Central Division; weighing in with a fourth place finish. By 2013-14 the club
was playing its football in the East Region South Division.

Albert
finished in fourth place in 2016-17 before being placed in the East Premier
League South for 2018-19 after further Junior restructuring under manager Barry
Cockburn. A bottom place return saw the appointment of Brian Farmer as the new
manager. 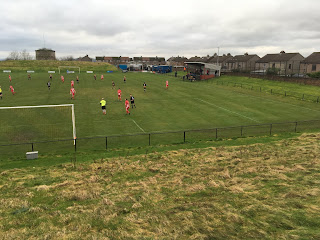 Lochgelly
Albert FC will play in the SJFA East Premier League South in the 2019-20
season.


Lochgelly
Albert 3 Stoneyburn 2 (Saturday 25th January 2020) SJFA East Region
Premier League South (Att: c50)
There are
two things I like about the Junior set up in Scotland. They don’t have ridiculously
large league’s and spread their fixtures out so that there’s often games to be
seen in late May and sometimes cup competitions in June. 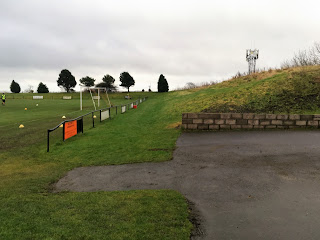 The second
is they don’t force clubs to spend money they don’t have on unnecessary ground
facilities; even though most venues have some covered enclosure, pie hut,
toilets and some with a bar.

That’s all
that’s required for the numbers attracted to games. Too many non-league clubs
south of the border have been saddled by inconsistent grading committees with
costs to build facilities that are never used; endangering the longevity of the
said clubs. 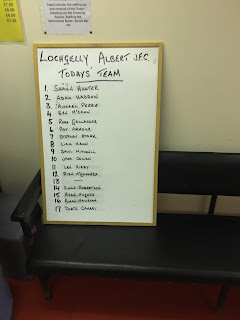 With a lack
of floodlights, the Juniors either play earlier on a Saturday afternoon in the
winter months or just after tea midweek when the light allows. Lochgelly’s 1.45
kick-off gave me an opportunity to at least see half a game before I headed off
to a SPFL game at 3pm.

Yes, it
could be argued that the ‘Juniors’ were falling behind those clubs who’d
defected to join the Scottish FA league’s and become affiliated to that
association, especially financially, but I still had a liking for the
organisation and its clubs. 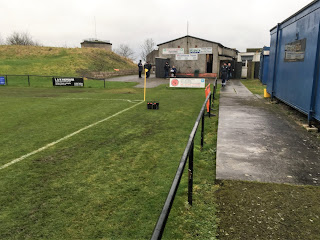 My couple of
days using the bus services of Fife had gone well. I’d visited numerous of the
Kingdom’s football clubs to take photos. Already my Saturday had been occupied
with calls to Kelty Hearts, Crossgates Primrose, Hill of Beath Hawthorn,
Dundonald Bluebell and Lochore Welfare.

An added
bonus of coming across the disused ground of former club Ballingry Rovers on way
back to Lochgelly from Lochore, was the icing on the cake. I still had time for
a pint before my first game of the day. 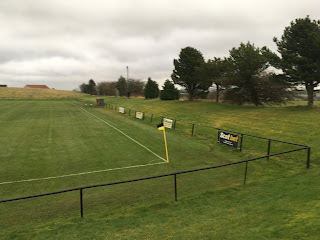 Walking up
High Street from the town centre I was aware of Torleys Bar on the left. My
aide Prorege from the excellent Non-League Matters forum had told me that it
was a reasonable pub with a little bit of added info.

I was told
that Lochgelly had the cheapest property prices in Scotland and that the school
has the worst exam results in Scotland, but it didn’t make it a bad place. That
was good with me. I like earthy places, providing the people are friendly. 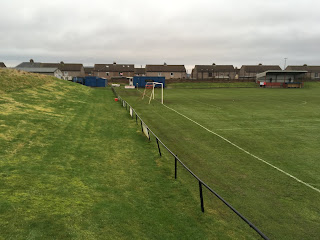 The Old
Ship, up the hill was just a couple of minutes walk away from Gardiner’s Park. I
used to ask my Dad what pubs were like when he first started going out? I
imagine he’d have said something like this one.

The long
narrow bar against the street took me back to a wee un, to use local
vernacular. The landlord was a friendly chap who asked if I was there for the
match? I don’t suppose Lochgelly saw many tourists? 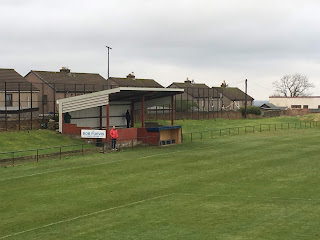 He said he
was a former director at Raith Rovers. A fella at the bar was a Dunfermline fan,
so we had a quick chat about their match the previous night which I’d been to. They
both shook their heads and laughed when I told them I’d be doing the first half
at Albert before heading off to Cowdenbeath v Brechin City.

After my
pint of Belhaven Best, it was up and around the corner into South Street where
a gap led to the ground entrance. Admission was a fiver with no programmes
available. It was time to find some food. 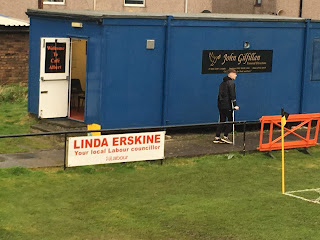 Café Albert,
a nudge towards the French connection of the club name was only serving hot
drinks. The pies would be another ten minutes. I’d left my Scarborough Athletic
hat on an earlier bus, so I purchased a Lochgelly Albert beanie to keep my melon
warm for £7.

It was a
wise purchase. Gardiner’s Park was atop a hill with some grand views from on
top of the steep grass banking which enclosed the pitch on three sides; with
the Mossmorran Gas Plant raising my curiosity in the distance. 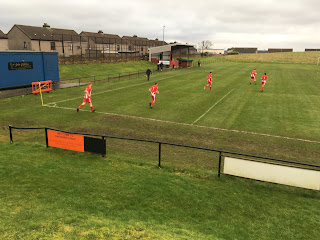 The ground
graders down south would have kittens seeing people stood on grass banking
without hard standing right around the pitch, but I loved it. They offered some
great photos opportunities. A decent sized covered standing enclosure offered
shelter.

The wind was
blowing down the pitch with a bit of light drizzle in the air as the teams ran
out to kick off bang on time. I seized my opportunity to grab a Scotch pie and
excellent lentil soup for a great bargain of £2.70. 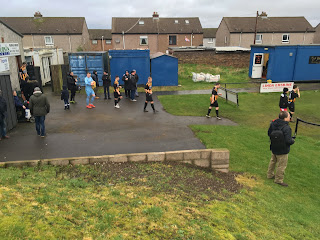 Unfortunately,
I heard a bit of a cheer and laughter while I was at the counter. I poked my
head of the door to find out that Albert had gone 1-0 up through a speculative
long range effort from Stephen Stark in less than a minute.

There was a
slight surprise in store for me when I saw the two linesmen. They were an
official from both sides without any kit. VAR was on another planet. The club
official simply flagged when the ball went out with the ref deciding offside’s. 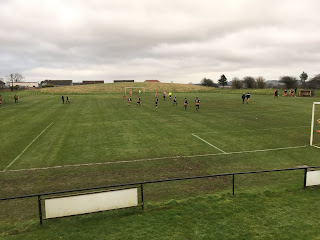 Stoneyburn
had gone into the game in second spot in the table against their mid-table
hosts, but it was Lochgelly with the wind at their backs making all the running
with skipper and left back Michael Perrie driving his side forward.

Albert were
playing plenty of clever football with Sami Mitchell and Jack Cowan making
plenty of good movement to stretch ‘The Fulshie’ defence. I was delighted to
see the number 11 listed as ‘Trialist’ on the club Facebook page. 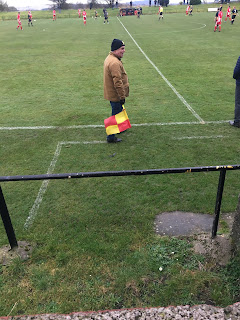 Shots were
being fired towards the visitor’s net, with your truly doing a bit of work as
impromptu ball boy collecting wayward efforts while taking my photos. I was
back under the cover when the lead was doubled through Mitchell with help from
some slack defending.

The
Stoneyburn fans and officials on the far side bank were cheered after a header
from a corner was parried by home goalie Shaun Hunter with Ryan Robertson
slamming in the rebound from close range. 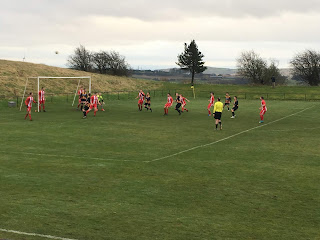 There were
several instances where I expected the defences to scream “offside” towards the
referee, but they simply got on with the game and letting the man in black get
on with his job. Indeed, the only grumble I heard was in the direction of the
Albert flagman when he signalled a ball had gone narrowly out of play.

Albert’s man
of the match, Pat Armour restored the two goal advantage six minutes before the
interval in another move that I thought looked very tight for offside. Again,
there was no complaints. Perhaps I struck lucky? I know I enjoyed every minute. 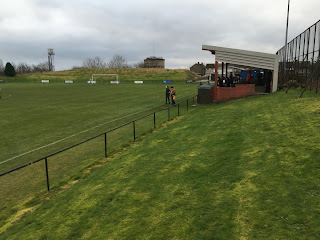 As the ref
blew for the interval it was time for me to head away. I’d had a good time in an
organisation that once again offered me entertainment and value for money. I
later learned that Stoneyburn made it 3-2 with around a minute left of normal
time. Local reports said that the Albert were well worth the win.

I headed
back down the hill via Well Road and Dundas Street to Main Street from where
the 33 bus towards Dunfermline dropped me off in time to be inside Central Park
for the afternoon’s main course before the teams came out. 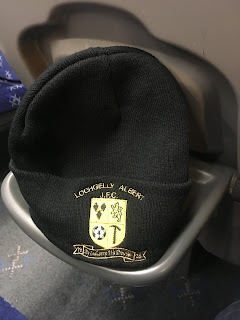 Hopefully, I’d
get to more SJFA matches in the future.