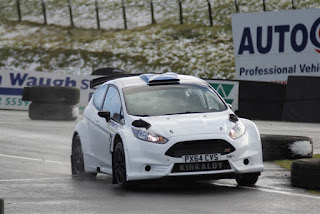 Alan Kirkaldy made it look easy. Second
fastest on the opening stage of 8 he was fastest on the next one and then just kept
on going. Over a minute clear at the half way point he finished over 2 minutes
clear of Donnie MacDonald by close of play.

A wet, slushy track and a snow capped Knock Hill greeted competitors
on their arrival, and there was no warm welcome from the mercury either. If you
had a thermometer, the liquid stayed well hidden in its wee bubble at the foot
of the scale! The sun and blue sky did make an appearance in the afternoon, but
the temperature stayed firmly in the permafrost zone.

Given those freezing conditions, Alan and Donnie did their
bit to cheer up the huddle of human icicles in the shelter at the Hairpin. Forget
‘racing lines’ these boys looked as though they were auditioning for the title of
Drift King Scotland as they tyre smoked all the way in, round, and out of the
tight uphill bend on SS7. A little bit of magic to crack frozen cheeks into a
smile.

Kyle Adam was first 2WD car home in 3rd place
just ahead of John Marshall debuting his new Skodaru. His total mileage in the
car prior to today was a 3.5 mile run out at Race Retro on Friday.

Robert Marshall was 5th actually tying with 6th
placed Andrew Kirkaldy who lost out badly in the slush in the first stage and
spent some time in the sheuch on the 7th. 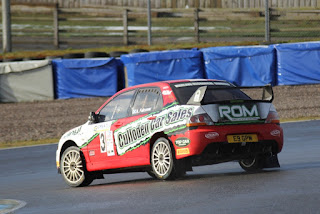 Joe McKeand was a sensible 7th ahead of the top
1600 runner Des Campbell who stole the show with Steven Hay in the 1600 Corsa
until the engine suffered a mighty bang in SS5. These two were fighting for
podium places early on till the track dried out, and before the Corsa made a
passable impression of the nearby Mossmorran complex with a flare-out and
smoke. Lots of smoke.

90s star Jock Threadgall made a one-off appearance in Nigel
Atkinson’s Lancer to celebrate his 60th  birthday and finished 9th ahead of
young Harry Chalmers. Mention must be made too of the 11th placed
runner, Michael Cruickshank’s 1 litre Micra. Think flea on the back of a cheetah.

Scott MacBeth was holding 2nd place till a turbo
pipe blew off the Lancer in SS6 and Trevor Gamble retired his Fiesta R5 when it
started overheating.

The real star of the show? Shona’s Mars bar cake – not so
sure about the chocolate banana cake though!